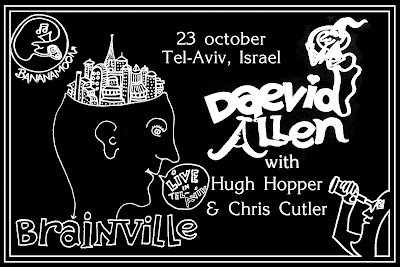 Since meeting Daevid Allen in 1999 I had the wish of bringing Brainville 3 to Israel.
Brainville is a trio consisting of 3 legendary key figures in the music scene of the late 60's early 70's . Daevid Allen leader and founder of Soft Machine and Gong, Hugh Hopper, The fuzz bass behind Soft Machine and Chris Cutler the drummer most famous for his role in Henry Cow,Art Bears and the founder of Recommended Records. 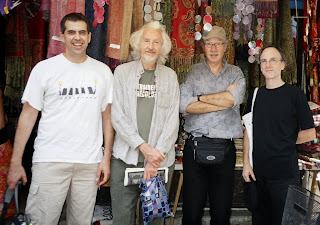 Coming together for loose and spontaneous dialogs with old and new music. Flexing musical muscles, taking chances and enjoying themselves in the process. It took a while but with the drive, enthusiasm and energy of Victor Levin of Auris Media Brainville played their first show in the holy land in October 2006.
A bit of background: Daevid & Hugh met and collaborated in the early 60's Hugh played with The Daevid's first Trio in 1963 along with Robert Wyatt. They combined free-jazz and beat poetry. In 1967 Daevid formed The legendary Soft Machine which Hugh joined in 1968. Daevid's tape loop work was a major influence on Hugh's debut album 1984 .As for Chris Cutler although he was a full member of Henry Cow through the 70's he also used to fill in when Gong was missing a drummer.He also played on Daevid's solo album N'exist Pas! in 1979. Hopper & Cutler collaborated on Lindsay Cooper's Oh Moscow album.
The show at The Zappa Club in Tel Aviv was well received and lived up to the huge expectations Besides of having fun while doing their live sound I was also able to record the show.
One year later comes this live cd on Chris Cutler's Rer Records and one of the songs from the Tel Aviv performance is included . 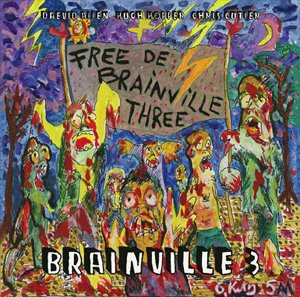 So here is also the video capturing the preformance of I Bin Stoned Before the old Daevid song from the classic Gong Electrique Camambert album dedicated to the wonderful late Pip Pyle who played on the album.
This was shot by music enthusiast Kfir Ripshtos